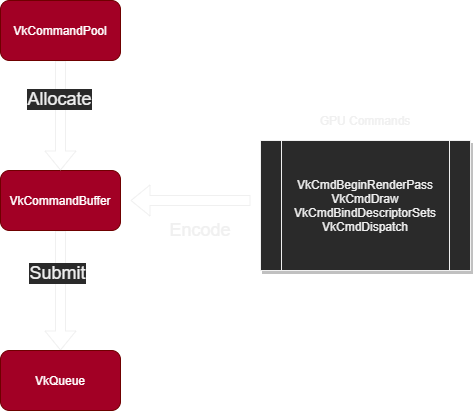 Unlike OpenGL or DirectX pre-11, in Vulkan, all GPU commands have to go through a command buffer. Command buffers are allocated from a Command Pool, and executed on Queues.

The general flow to execute commands is:

Recording commands in Vulkan is relatively cheap. Most of the work goes into the vkQueueSubmit call, where the commands are validated in the driver and translated into real GPU commands.

Queues in Vulkan are an “execution port” for GPUs. Every GPU has multiple queues available, and you can even use them at the same time to execute different command streams. Commands submitted to separate queues may execute at once. This is very useful if you are doing background work that doesn’t exactly map to the main frame loop. You can create a VkQueue specifically for said background work and have it separated from the normal rendering.

All queues in Vulkan come from a Queue Family. A Queue Family is the “type” of queue it is, and what type of commands it supports. What we want in this guide is a queue that supports both Graphics and Present. This means that the same queue will be used for both rendering and to display images into the screen.

Different GPUs support different Queue Families. An example is this NVidia GT 750ti from Vulkan Hardware Info https://vulkan.gpuinfo.org/displayreport.php?id=8859#queuefamilies. It has 2 Queue families, one that supports up to 16 queues that have all features, and then a family that can support 1 queue for transfer only.

Transfer-only queue families in Vulkan are very interesting, as they are used to perform background asset upload and they often can run completely asynchronously from rendering. So if you want to upload assets to the GPU from a background thread, using a Transfer-only queue will be a great choice.

A VkCommandPool is created from the VkDevice, and you need the index of the queue family this command pool will create commands from.

Commands are typically allocated sparingly, and then reset every time. The fast-path for this is to reset the entire command pool, which will reset all of the command buffers allocated from it. It is also possible to reset them directly, but if you are making multiple command buffers from one pool, resetting the pool will be quicker.

All commands for GPU get recorded in a VkCommandBuffer. All of the functions that will execute GPU work won’t do anything until the command buffer is submitted to the GPU.

Command buffers start in the Ready state. When in the Ready state, you can call vkBeginCommandBuffer() to put it into the Recording state. Now you can start inputting commands into it with vkCmdXXXXX functions. Once you are done, call vkEndCommandBuffer() to finish the recording the commands and put it in the Executable state where it is ready to be submitted into the GPU.

Once a command buffer has been submitted, it’s still “alive”, and being consumed by the GPU, at this point it is NOT safe to reset the command buffer yet. You need to make sure that the GPU has finished executing all of the commands from that command buffer until you can reset and reuse it

To reset a command buffer, you use vkResetCommandBuffer().

For more detailed information on the command buffer lifecycle, refer to the Vulkan specification chapter on them https://www.khronos.org/registry/vulkan/specs/1.2-extensions/html/chap6.html#commandbuffers-lifecycle.